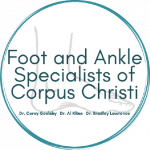 While studying and applying to Medical School, Dr. Kline continued to work in Corpus Christi and then moved to Houston, Texas. He worked at 3 different Houston area hospitals and a surgery center as a private surgical technician in the area of neurology, vascular surgery and total joint replacement surgery. Still in his early 20’s, it was during this period that he ran for Reebok Racing Team in Houston, Texas considering a professional career in sports.
He took a special interest in sports medicine and began working closely with residents of both orthopedics and podiatry in the Houston area. He then applied to various medical and podiatry schools in the United States. He was accepted to the Temple School of Podiatric Medicine in Philadelphia, Pennsylvania.

It was also during this time, that Dr. Kline met his wife Joann while living in Philadelphia. She also attended the Temple School of Podiatric Medicine. They were married in their second year of studies and began their family while still living in Philadelphia. After graduation, they moved to Ft. Worth, Texas where Dr. Al Kline completed a medical and surgical residency in foot and ankle surgery at John Peter Smith Hospital. In Ft. Worth, while starting a young family, Dr. Joann Kline started a Podiatric Home Health Care service. This was the first of its kind. This business model was passed on to the JPS Podiatry Residents. They moved to Corpus Christi in 1994 to start their practice.